OK, I realize this is a strange subject when it comes to low sodium cooking. But I also recognize that sometimes people use shortcuts. There is a place for convenience, processed, and packaged foods even on a low sodium diet. Everyone is different and their needs and abilities are different too. Some people simply don't enjoy cooking, while others may have undeveloped culinary skills. Some people have physical limitations that make it difficult for them to accomplish a variety of kitchen tasks. Some live alone or with only a spouse and keeping a fully stocked pantry and fridge means wasting a lot of food. Some people work long days and the prospect of “cooking from scratch” all the time is plainly exhausting. Sometimes illness strikes and the non-cook in the family must take over. There are all kinds of reasons for using convenience foods. The challenge is making the convenience foods compatible with a low sodium diet.

Meeting that challenge has been the purpose of my “Low Sodium Supermarket Dining” series. These last couple of weeks, I’ve been in the process of writing about using pre-prepped vegetables from the produce section. I already have developed a method of dealing with packaged mixes like Rice-A-Roni or Stove Top Stuffing: I start with the low sodium versions, throw in a plethora of vegetables, and, for the rice mixes, I also add about ¼ cup of plain white rice. That got me thinking... I wondered if there was a way to lower the overall sodium content of Hamburger Helper 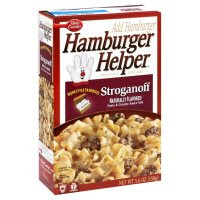 .
I must admit that I was very skeptical. In over 40 years of cooking, I think I've only used Hamburger Helper a couple of times, maybe twenty years ago when I was teaching and my children were still at home. In spite of my doubts, I wanted to give Hamburger Helper another try just so I could write about it convincingly and with credibility. It may be a product I wouldn’t use, but I realized that it might be useful to know how to transform it into a lower sodium food. I discovered that Hamburger Helper did not have any truly lower sodium options (unlike Rice-A-Roni, Zatarain's, & Stove Top). I headed to my local grocery store and bought a package of the classic stroganoff flavor. According to the package nutrition facts, one serving prepared per directions is over 750 mgs. sodium. Here’s what I did to lower that sodium content:

I added extra pasta. I knew the noodles in the mi 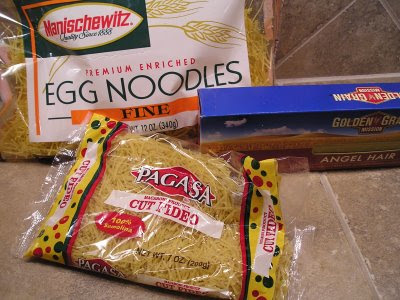 x were super thin and, therefore, quick cooking. I also figured that boiling a big pot of water for cooking additional noodles was not exactly a time-saving step. So I decided to use fideo, a very thin noodle similar to angel hair pasta. I found it in the Mexican food section of my grocery store. It was available cut into short lengths or in long twisted knots that needed to be broken up; I chose the short cuts. In the Kosher food section I also found Manischewitz brand fine egg noodles. And in the regular pasta section, I picked up some angel hair pasta just for good measure.

While the hamburger was browning, I cooked the noodles. I measured out one cup of fine egg noodles and put it in a pan with 1 cup of water. I let it cook at a bubbling simmer until the noodles were not quite al dente, about 4-6 minutes. Then I took the pan off the heat and let the noodles sit. No boiling in a big pot of water and no draining. Pretty easy. I added the pre-cooked noodles and any residual water at the same time as the Hamburger Helper noodles were added. I’ll admit that fine egg noodles mixed with short wide curly noodles may have looked a bit funny, but I didn’t care. (Note: I’m going to try this again without pre-cooking the noodles at all. I know I’d have to add more water but maybe I can save an additional step. I’ll report back.) 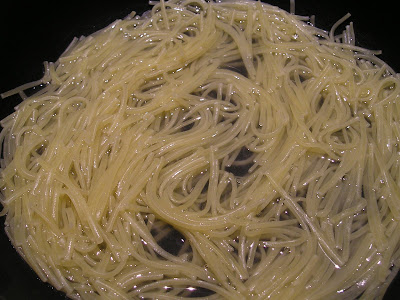 I omitted some of the Hamburger Helper seasoning. The flavoring comes in a packet separate from the noodles, so it was easy to remove and set aside about two tablespoons’ worth. That simple step alone removed a lot of sodium. I have to admit that I did a quick measure of the flavoring packet, and it came to between 4½ - 5 tablespoons of seasoning. By taking out 2 tbsp., I came close to cutting the sodium content in half. A benefit is that if I wanted to, I could use the leftover seasoning to flavor my own plain noodles some other time.

I cut the quantity of milk used. The stroganoff flavored mix called for 2¼ cups of milk. I thought that was a lot, especially since milk and hamburger each add their own natural sodium. Instead I used only one cup of milk and water for the rest of the liquid. I thought the final dish was creamy enough. (As an aside, I think the amount of hamburger could be reduced too. I felt one pound of meat was too much for the amount of pasta. The amount could easily be reduced to 2/3 - 3/4 pound. That reduction would also cut down the overall sodium content.)

I added 2-3 cups chopped vegetables. At the store I picked up an 8 oz. package of sliced mushrooms since they go so well with stroganoff. At home I coarsely chopped half an onion and three summer squash from my garden. I also included four Italian green beans from my garden. I sautéed all the vegetables with the hamburger. For a super easy meal, you could use only pre-prepped vegetables from the supermarket. Or even some frozen vegetables. 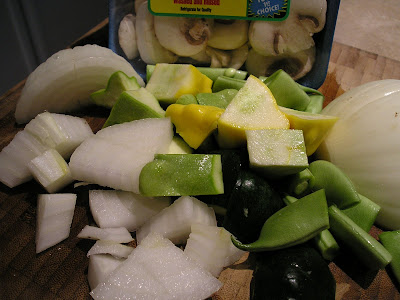 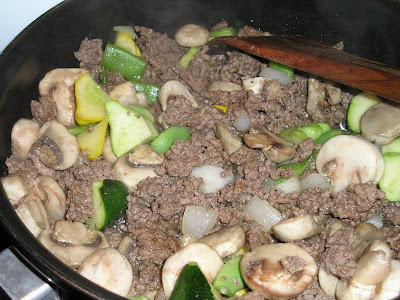 The final dish was much lower in sodium than if I had just followed the package directions. Plus it had a lot more nutrition thanks to the added vegetables. Obviously, the flavor was milder because I didn't use all of the seasoning packet. But my husband enjoyed it. Because of the extra noodles and vegetables, the dish also resulted in 6 good sized portions. Enough for easy leftovers to reheat. I really don’t see how one package of Hamburger Helper, made as directed, can produce 4-5 servings. I like pasta, and the noodle portion was skimpy in my opinion. I also think the meat portion was out of balance with the pasta. To improve the pasta to meat ratio, I think you’d need to either increase the noodle portion, as I did, or decrease the quantity of meat used. 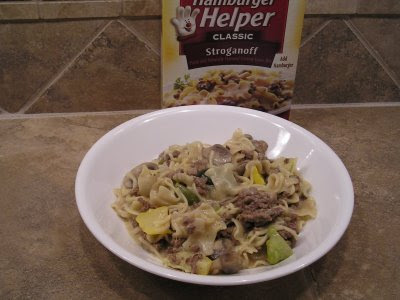 So, there you have it. Hamburger Helper on a low sodium diet. It can be done, and it can be easy. And you can adapt similar techniques to use with other supermarket convenience foods.

Processed/package foods do tend to overdo the salt .. which is why I tend to stay away from them :)

You are so right about the salt content of most processed/packaged foods. As you know, I'm basically a "from scratch" kind of cook. But I realize that not everyone is like me and sometimes doctors put people on low salt diets without really giving them any tools to work with. If you're a non-cook, the challenges can be difficult. Making everything from scratch, buying a bunch of low salt products online, and following low salt recipes may be daunting to some. That's why I think it's important to develop techniques that allow some use of convenience foods that are easily obtainable from most supermarkets..

You are sooo good. I need to cut out salt and I appreciate a blog like your more than you know. Thanks!

Elenka, thank you so much for your kind comments. It's a struggle, I know, and we need to stick together.

Genious - who would have thought it could be done. It just seems easier to avoid but you've stimulated me to look a little deeper into the how to of making things more sodium reduced friendly (is that even a term?)

The most simple way to cut the sodium in half is to use to boxes an only one packet of the seasoning mix . my kid can't tellthe difference especially with mac & cheese just add a little more unsalted butter .

Several years ago my husband was diagnosed with congestive heart failure and prescribed a low sodium diet. He's done very well with it, but it has been a tremendous challenge for me. Luckily, I was a good cook to start with and knew how to use a variety of herbs and spices. I've done a lot of experimenting and borrowing from others in order to keep our meals from getting boring. This blog is a record of my adventures with low sodium cooking. Hopefully, it will inspire and encourage others.