I really like the different soups served in Chinese restaurants. I love hot and sour soup, wonton soup, egg flower soup, and corn egg drop soup. The only problem is that most restaurants over salt their broth base so much that it renders their soups almost inedible – even if you’re not following a low sodium diet. So I’ve taken to making my own versions. Easy, just as tasty, and low in sodium.
I’ve been following the recipe from the Kitchn website for the egg drop soups. Its recipe is based on a recipe from Serious Eats. You can make the soup a little different each time, depending on what you have on hand or what you’ve got a hankering for. It can be as simple or as complex as you want. The Kitchn recipe uses a hint from Serious Eats, adding a bit of cornstarch in the eggs to keep them from getting rubbery. 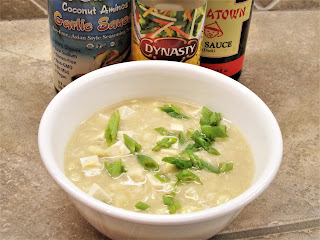 To make corn egg drop soup, I add at least 1 cup of NSA corn, either frozen or canned, to the basic egg drop soup recipe. If I’m in a particularly lazy mood, I’ll leave the corn kernels whole. But if I’m more ambitious, I will puree ½ cup in my mini food processor. The pureed corn adds an extra layer of corniness and sweetness that I find comforting and soothing.
The flavoring agents I always use are ginger, white pepper, low sodium soy sauce, and green onions. I also like to include small cubes of tofu, and sometimes a handful of frozen peas and carrots. For a heartier soup, I may add some finely chopped leftover cooked chicken.
The corn egg drop soup makes a great appetizer/starter to a meal or a light lunch or dinner all by itself. It reheats well too. Just heat it gently, and don’t boil it. I always add fresh green onion slivers to leftovers.

Heat the NSA stock/broth over medium-high heat. Add all the flavoring extras you’ve chosen to the saucepan with the stock. Turn down the heat to medium-low and simmer for 15 minutes. If using frozen peas and carrots, cook them with the stock and flavorings.

Add any soup extras to the stock and simmer for another five minutes. Save some scallions for sprinkling on top of the soup at the end.

Remove about ¼ cup stock and whisk it with 1 tablespoon of cornstarch in a small bowl. Use a spoon or a whisk to stir the soup while slowly pouring in the cornstarch slurry. Let simmer over medium heat for a couple of minutes. The soup will begin to thicken a bit.

Whisk together the eggs in a small bowl with the remaining teaspoon of cornstarch. Make sure the soup is at a slow simmer.

Use a large spoon or ladle to gently stir the soup in one direction. Slowly drizzle the egg mixture through the tines of a fork. Let the soup stand for 10 - 15 seconds, then stir gently to break up the egg to desired size.

Several years ago my husband was diagnosed with congestive heart failure and prescribed a low sodium diet. He's done very well with it, but it has been a tremendous challenge for me. Luckily, I was a good cook to start with and knew how to use a variety of herbs and spices. I've done a lot of experimenting and borrowing from others in order to keep our meals from getting boring. This blog is a record of my adventures with low sodium cooking. Hopefully, it will inspire and encourage others.